To celebrate 200 years of Ardbeg whisky, the distillery will exhibit images which are intended to capture the “untamed” spirit of Ardbeg. This exhibition is creatively called ARTBEG.

The Artbeg Exhibition, which will be revealed today, marks Ardbeg Day (to be celebrated on 30 May 2015). The exhibition is comprised of 20 layered digital collages which can be viewed on the external wall of the Ardbeg distillery’s West Maltings building and on www.ardbeg.com. The exhibition will be removed at the end of this year.

The collages are created by photographer Peter Heaton, who is proclaimed to be an “ardent” Ardbeg single malt fan. After visiting the distillery in 2014, Mr Heaton created the collages by layering his photographs of Ardbeg and Islay with material from the Ardbeg archives. This includes correspondence to and from Ardbeg, bills and other records.

“I have always had a fascination with Islay and its single malts, particularly Ardbeg. The exhibition interprets the Distillery over time and I wanted to create layered, complex imagery which would encourage people to give the work some time and think about the theme of past, present and future.”

Ardbeg’s Distillery Manager, Mickey Heads, also had a few words to say about the exhibition, and said:

“This exhibition provides an intriguing twist on the story of Ardbeg – and contains more than a few surprises. The complexity of these remarkable images makes you stop and think about the whisky’s heritage and its future”.

Malt Mileage is very fortunate to have – with thanks to EVH – received two exclusive images from the Artbeg exhibition to share with readers. 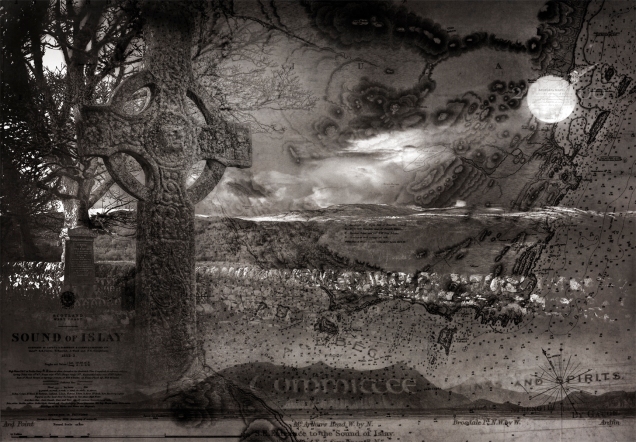 The first image, “the committee meets”, is a collection of images that contain the 9th Century Kildalton Cross, which stands near the Ardbeg distillery, a vintage map of Islay and a document which makes reference to the “Sound of Islay”; the narrow straight between the isles of Islay and Jura off the west coast of Scotland.

The picture itself is dark, with what seems to be a storm brewing in the distance. The ashy and sooty look of the collage captures the mood of Ardbeg’s signature smoky peat, while the sun softly shining though the darkness seems to reflect Ardbeg’s sweetness – what some call the “peaty paradox”.

The waves bashing against the rocks signals a turbulence shared in the first image, though it predominately seems calm and picturesque. Having been raised by the coast most of my life, the smell of seaweed and the sea comes to my nose just looking at this image; triggered by the yellowish roughage. This seems to capture the maritime nature of island whisky, such as that from Islay.

Art tends to be a subjective experience, and the above notes reflect what my eyes perceive. What do you perceive?

Ardbeg fans are encouraged to sign up to the Ardbeg committee at: http://www.ardbeg.com/ardbeg/members/public/index/register.