It was June 2018, and we had zigzagged our way around the cobble stone streets of Rome, the hilly Tuscan towns of Pienza and Montepulciano, the picturesque seaside village of Lacco Ameno in Ischia, the ruins of Pompeii, and, finally, the chaotic city of Naples.

Despite the political union of Italy after its unification in 1871 (when Rome was finally joined to the new kingdom and declared its capital), each region of Italy was unique in food and language. In Rome we ate trippa alla Romana (tripe in a simple tomato sauce) and in Tuscany we enjoyed cantucci con vin santo (almond biscuit with dessert wine), and the Neapolitan “dialect” passed on to me from my grandparents seemed somewhat foreign. In Naples we ate baccala (cod) and in Ischia we had coniglio (rabbit), and finally that dialect I had learned whilst growing up was put to good use.

Whilst food in Italy is more regional than Italian (the dishes are usually recognised as Roman, Neapolitan, Tuscan, etc, not always “Italian”), one uniform feature of Italian cuisine is the presence of alcohol: grappa, liqueurs, cocktails, and the “corrected coffee”.

Join me as I fondly look back on our time drinking through Italy.

Grappa is made from distilling the leftovers of the wine making process, not just the wine. After the wine grapes are pressed, what remains are squashed grape skins, pulp, seeds and stems (called “pomace”). Grappa is made from this pomace. The best grappa is made using fresh pomace and good practice dictates that the pomace needs to be fermented within hours of being pressed. Some even say that the pomace should not be fermented for too long, so quality grappa seems to capture the freshness of the pressed grape.

Once fermented, the pomace is distilled. Water cannot be added to the pomace, so alcohol is evaporated straight from the mushy wine making by-product. The idea is to ensure that the aromas and flavours of the pomace and the grape varietals carry through into the spirit. To achieve this characterful grapey spirit, serious distillers avoid using continuous column stills and instead prefer to use copper stills which permit more control over distillation processes. The continuous column stills will produce a more refined and neutral spirit stripped of flavours, which would be closer to a vodka than a grappa. A grappa distiller wants to keep the aroma and flavour of the pomace, not strip it away.

Ordering grappa in Italy is oftentimes fairly simple, as menus tend to have two choices: bianco (white or un-aged) or in barrique (in barrel or aged). Connoisseurs will say grappa is much more complex than that because it can be aged in casks of all sizes and wood types (Limousin, Grésigne, ex-sherry oak, wild cherry and ash wood are just some), not just barrique casks. But, most Italians don’t seem overly concerned with the specifics and instead they just want a fiery drink to help aid digestion after a big meal. Grappa is often the digestive of choice in Italy.

The drink itself is uniquely Italian. Served at an alcoholic strength of 40% or more, grappa has a bite to it and is typically drying on the palate with a distinctive green element that smells and tastes of the pomace from which it is made (grape skins, stems and seeds) – sometimes it is vegetal, other times herbal, other times woody, and often a combination of all these characters. That green character is fragrant on the nose and bitey on the tongue, and tends to leave the taste of bitter and astringent tannin.

Of course, a grappa’s character will also depend on what grape varietal is used to make the grappa as well as the oak type and cask type the grappa is aged in, if it has been aged.

Traditionally grappa was made from whatever leftovers there were from winemaking and so distillers would mix grapes of different varieties. These days, grappa makers may use a single grape type from specific wine growing regions. So, in addition to the distinctive taste of pomace, grappa may often show characteristics of a specific grape type and wine region or what the French wine makers call terroir.

Two grappa gulping experiences I enjoyed whilst in Italy are etched in my memory.

In Pienza I put my nose and lips to a glass of Citille Di Sopra Grappa di Brunello di Montalcino, which was bottled at 42% abv. I liked that this grappa could be traced back to the small Tuscan town of Montalcino. The grappa proved to be tart and grippy, showcasing earthiness, minerality and soft green notes with fleshy tannic grape skins.

Much further south of Italy, on the Neapolitan island of Ischia, I tried a “grappa in barrique” at a relaxed hill-side osteria that overlooked the coast of the volcanic island. The sun was just setting over the mountainous island, and the sky was starting to glow red.

The grappa’s subtle oak influence added a layer of depth to what was otherwise rough and tumble firewater defined by characterful green elements – fragrant branches and vegetal notes on the nose, and then on the palate soft oak with jagged spices and heavy hitting bitter tannins after a blast of fiery alcohol. I can think of no better way to finish a delicious meal of stuffed zucchini flowers, eggplant parmigiana, mussels, and pasta made with orange peel and “pressed blue fish”; Neapolitan and Sorrentine delights all washed down with red wine from Mount Vesuvius.

Grappa may be distinctly Italian but other drinks are unique to a region, like Rucolino.

Whilst we were in Italy we hiked to the top of Mount Vesuvius and looked inside the volcano’s crater. Beyond the ashy crater was a breathtaking view of the bay of Naples, pictured below. In the distance, the volcanic island of Ischia sits beneath cloud cover. That island, which is about an hour high-speed ferry from Naples, is home to a liqueur called Ricolino.

At a restaurant in Lacco Ameno, I had my first taste of Ricolino. The waiter plonked the whole icy cold bottle, which had obviously come straight out of a freezer, onto my table. He smiled, handed me a shot glass, and explained the liqueur is only available on the island of Ischia.

Rucolino is made from two types of rucola (Italian for rocket) which grow on the island of Ischia – riccia and vellutata. The rocket leaves are combined with citrus peel, herbs and roots and then this mix is left to soak in alcohol for 40 days before being filtered and mixed with sugar and water.

Being part of the amaro family of Italian liqueurs, it is “bitter” and thought to help aid digestion. Rucolino was a lovely digestive, especially after a big Ischian meal of rabbit and bucatini washed down with local red wine (rabbit is the island’s specialty, and I highly recommend the rabbit at La Battigia on Corso Angelo Rizzoli which was expertly matched to local wine by our waiter Silvio). Rucolino is bitter-sweet, almost medicinal in taste like a sweet cough syrup, and melds bitter rocket with zesty citrus and sweet sugars.

One very cool thing about ordering cocktails in Italy is that they come with free snacks called appertivo, which you can think of as “warming up” eating before the main event of dinner. Mind you, in Italy dinner usually starts around 8.00pm and it isn’t uncommon to see Italians enter restaurants after 9.00pm, so appertivo can help tide you over until dinner if you want to eat dinner at Italian dinner time.

Caffè corretto, or the “corrected coffee” in English, is an espresso “corrected” with a splash of hard hitting booze, usually grappa but sometimes Sambuca or brandy. It is thought the alcohol balances against the caffeine, to “correct” the coffee. There is no science behind this assertion, but coffee never tasted so good with a nip of hard liquor to jazz it up.

There may be Italian single malt whisky floating around Italy, but I didn’t find it at any of the local stores, bars or hotels. One whisky I did consistently find in corner shops and menus was Glen Grant 5 year old single malt Scotch whisky. The youngest in the Glen Grant range, the 5 year old is exported only to the Italian market.

I found the Glen Grant 5 year old to be eminently drinkable. Its youth is a big part of its appeal. The whisky itself is light, crisp, clean and distillate-driven, with soft orchard fruit such as apple and peach alongside a foundation of malt and husky barley. The 5 years in oak gives the whisky an injection of vanilla and caramel, though the Glen Grant distillery character is largely uninterrupted. Its tasty, elegant, simple and honestly marketed as 5 year old whisky. Thumbs up! 👍 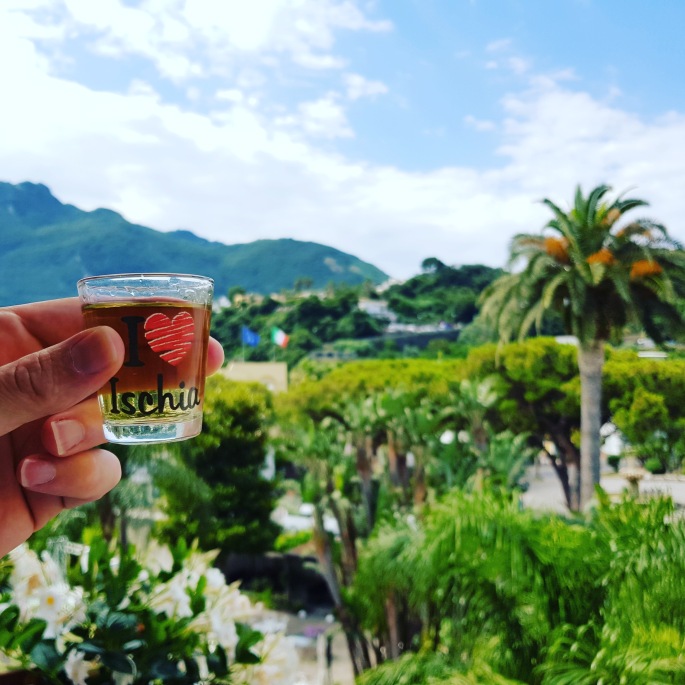 So let’s all raise a glass to beautiful Italy, and be sure to enjoy la dolce vita. Salute!

One thought on “Drinking our way through Italy”