About one hundred years ago, shortly after the United States introduced prohibition, the residents of Templeton, a small town in Iowa, started bootlegging hooch made from molasses. It wasn’t long until this hooch found its way to the speakeasies of Chicago, where, the story goes, it was discovered by mobster Al Capone. Back in 1920s Templeton, stills remained hidden under pigeon pens and code (such as white horses being placed in front of farmhouses) was used to signal that new batches were ready for distribution. When prohibition ended in 1933, though, Templeton’s story fell silent and the brand was forgotten as whiskey makers eventually dominated the (now legal) market. But, in 2006, a brand of whiskey called “Templeton Rye” was created to pay tribute to Templeton’s bootlegging past, and now this (very much legal) whiskey is available in the United States, Canada and Australia.

The whiskey’s recipe is not exactly the same as the original prohibition era recipe used to make the hooch that is rumoured to have caught Capone’s interest. Shane Fitzharris, the current Executive Vice President – Global Sales of Templeton Rye Spirits, tells me that Templeton Rye is not a recreation, but it is simply inspired by the prohibition era bootleggers.

The original hooch bootlegged back in the 1920s was, Shane says, made using molasses so it would have resembled rum, not whiskey (for those who do not know, rum is made from sugar whereas whiskey is made from grain). Although the bootleggers in Templeton were producing what was effectively rum during Prohibition, Shane reckons the liquid earned the moniker “Templeton Rye”.

In 2006 Keith Kerkhoff, a grandson of the original bootleggers, decided to revive “Templeton Rye”. Apparently, and according to Shane, ‘Keith had one of the original bottles from his grandfather’ and efforts were made to try and replicate the taste. The problem was that the original prohibition era recipe does not comply with existing whiskey regulations within the United States and following the original recipe would produce liquid that cannot be legally called “whiskey”.

Templeton Rye’s mash bill is 95% rye and 5% malted barley, and the spirit comes from Lawrenceburg Distillers of Indiana (now Midwest Grain Products of Indiana), a large distillery which produces spirits for various brands. The spirit is aged in American new oak barrels, and once aged it is bottled as “straight” Rye whiskey.  Shane says:

“Both the 4 year old and the 6 year old have the same mash bill with the 4 year old a 40% abv and the 6 year old a 45.75% abv. These are both “Straight” Rye whiskies and it was very important for me to ensure that the word “Straight” was clear on the labels in Australia and around the world. Where you see the word “Straight” on either Bourbon or Rye it means there is no colors or additives and is a completely natural whiskey. This was an important move for us to take.”

Over 22,000 barrels are presently ageing Indiana distilled Rye whiskey in the distillery’s maturation warehouses in Templeton, which suggests that there are big plans for the brand in the coming years.

The future and the new distillery in Templeton, Iowa

Although current batches of Templeton Rye were distilled in Indiana and not Iowa, 2018 marked the opening of the Templeton Rye distillery in Templeton, Iowa. This means that,

The opening of the new distillery in Iowa is a welcome shift that I think will help give the brand more individuality and a greater reconnection with the brand’s claimed history as well as Templeton’s distilling past.

As for Templeton’s own distillate stock, about 6000 barrels have been filled since the distillery began distilling on-site in 2018.

Whilst Templeton Rye’s story is based on prohibition era bootleggers who made molasses based spirit, the brand seems to have its sights firmly fixed on a future of whiskey making. I’m told that we can expect some new barrel finishes and a “much older release” of Templeton Rye, and that the distillery has started distilling bourbon which Shane says has a ‘very unique mash bill’. The expected release of the bourbon is a couple of years away. 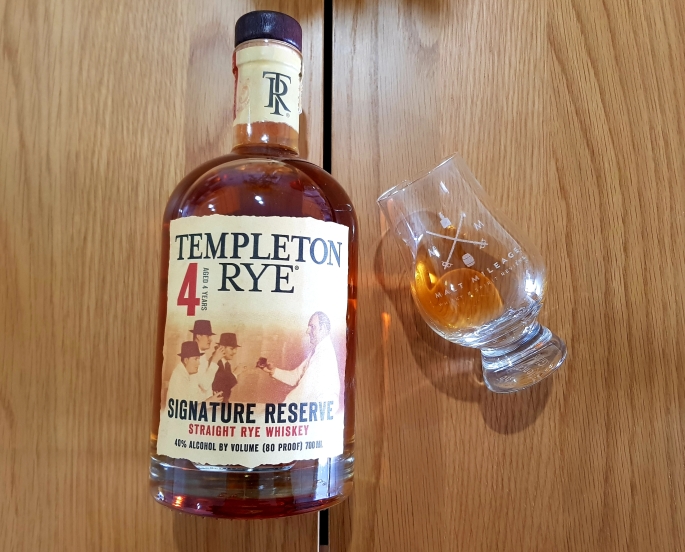 Templeton Rye’s Signature Reserve is aged for 4 years in new American oak barrels, and it is made from spirit which is produced in Indiana from a mash of 95% rye and 5% malted barley. I’m told that the prohibition era hooch which inspired the whiskey was made from molasses, so the molasses-based prohibition era hooch made in 1920s Templeton and the rye-based Templeton Rye of today each have different core ingredients.

Templeton Rye Signature Reserve has a fragrant, sweet and “floral” (dry leaves, petals) distillate driven aroma with caramel, anise seed and syrupy tinned apricots/peaches. On the palate the mouth-feel is thin and the rye delivers an almighty spicy kick which intensifies into a warming and slightly bitter finish of prickly spices, which is accompanied with dark chocolate, soft wood char and rich toffee.  At its price, which is about AUD$70, this punchy rye has an impressively clean yet flavourful profile that I’ve enjoyed sipping neat, on ice, or in rye based cocktails (especially a Rye Old Fashioned).

*Thanks to Kollaris & Co for the opportunity to try a bottle of Templeton Rye’s Signature Reserve.