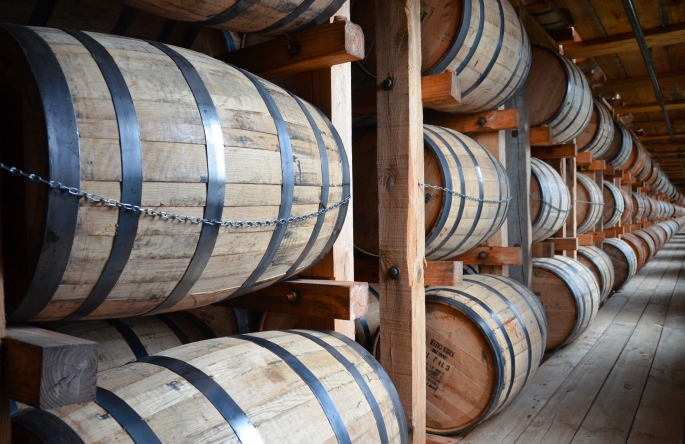 As you lovingly gaze at your 18 year old Scotch whisky, have you ever wondered whether that Scotch can be produced in less time than 18 years?

Whisky is thought to get most of its flavour from interacting with the oak casks in which it ages. There may be a few ways to get a maturing whisky to increase its uptake of wood flavours from these oak casks, such as by using:

In this post, I’ll just take a look at heat.

One common claim is that heat can accelerate a whisky’s maturation.

It is no secret that heat can speed up reactions. It therefore makes some sense that a whisky may quickly develop certain flavours as it sits maturing within oak barrels in warm climates.

Distillers in these climates might say that their whisky matures “faster” than it would in colder Scotland.

But, don’t expect some whisky barrel sweltering in the heat to be producing liquid that is Scotch whisky on fast forward, or some short cut to an old Scotch whisky.

In the much cited article ‘Effects of oak wood on the maturation of alcoholic beverages with particular reference to whisky’ published in the journal Forestry, JR Mosedale writes:

“Maturation and extraction results may vary under different conditions, with a wide range of factors influencing the process… [i]t is unlikely that any optimum temperature exists in regard to maturation, as the effect on flavour will differ for each of the components. It has been found that extraction and formation of flavour congeners will generally occur more rapidly at 30°C compared to 20°C. The greatest increase was in acetaldehyde and fixed acids, while lactones and furfural levels appeared unaffected… Evapouration may … result in further effects, due to the changes in the proof of the maturing distillate”

This suggests that whisky will likely be made up of its own unique composition of flavour compounds which are in part owed to the conditions to which it is exposed during maturation, and one of those conditions is temperature. Whisky probably develops uniquely in different temperatures, not to mention different climates.

If the way whisky matures depends on the conditions to which it is exposed, whisky which matures in conditions that are different to conditions in Scotland will probably mature in a unique way depending on those conditions.

An old Scotch whisky kind of reminds me of cold brew coffee, which is made by soaking ground coffee in room-temperature water for about 24 hours. Of course, you can just add hot water to a French press containing the ground coffee and you’ll have a cup of hot coffee in a jiffy. The hot water may rapidly extract flavours from the coffee, but it won’t give you cold brew coffee.

Perhaps you can’t hurry that 18 year old Scotch, too?