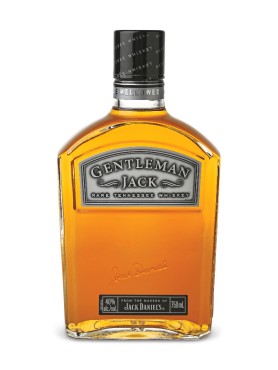 Recommended use: Neat, serve with ice/mixed

Jack Daniel’s produce Tennessee whiskey. Jack Daniel’s Tennessee whiskey is basically bourbon (that is to say, whiskey that is made from at least 51% corn and aged in new charred oak barrels) that is filtered through hard sugar maple charcoal before it is aged in oak barrels. To make Gentleman Jack, Jack Daniel’s take whiskey which has been charcoal filtered and then aged in oak, and filter that aged whiskey a second time through sugar maple charcoal. It is said that, for this second filtration to make Gentleman Jack, the charcoal is less densely packed than the first filtration.

Filtering newly made spirit through charcoal is a process that many moonshiners and distiller’s call “polishing”. When a flavour spirit is passed through charcoal, it is cleansed of impurities because charcoal serves as a “molecular sieve” which blocks molecules larger than ethanol from passing through it. This means that molecules such as ethanol can pass through, while other compounds which tend to hold flavours get stuck to or in the charcoal. In theory, if whiskey is passed through charcoal it is not made any better or “mellow”. The filtering through charcoal only serves to strip the whiskey of flavour compounds (which may taste good, or bad) and make it more concentrated with ethanol. I therefore refuse to jump on the bandwagon and repeat Jack Daniel’s marketing mantra that this whiskey is “charcoal mellowed”.

The nose offers soft sweet ethanol interlaced with mint, lemon, and, the aroma of caramel, brown sugar and vanilla which is so emblematic of Jack Daniel’s. Despite the charcoal filtration, I detect corn in the bouquet. The charred oak is there, but it seems to have been softened by the second filtration through charcoal. On the palate the whiskey tastes sweet and drinkable – find vodka-like sweet alcohol, mint, vanilla, apple, caramel, burnt toffee and brown sugar. The finish offers sultana, cooked apple in syrup and very mild cinnamon. Overall, Gentleman Jack is a moreish  whiskey which seems to have been stripped of some heavier oaky flavours, and this means that it tastes much less wooded than other Jack Daniel’s whiskey despite having retained some lovely caramel and toffee. This is well worth a try, if you are looking for a soft and approachable “bourbony” whiskey without a heavy punch of oak and spice.