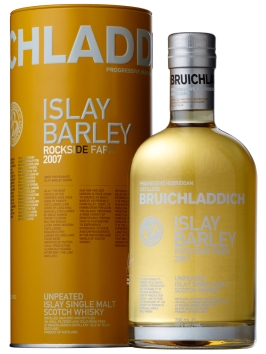 Barley is one of the core ingredients of malt whisky. Barley grains are malted, dried and then steeped in very hot water. That water (which is called “wort”) becomes infused with the sugars and flavours from the barley. It is then allowed to cool. Once cooled to an appropriate temperature, yeast is added to that water. If the water is too hot, the yeast will die. If the water is too cold, the yeast will remain dormant. If, however, the water temperature is just right the yeast will ferment the wort, and convert the sugars in the wash into alcohol. Once fermented, the wort becomes something similar to a beer without hops. That beer is called a “wash”. To make whisky, the wash is distilled to extract the alcohol from it. That distilled liquid is often called “new make”, and it is as clear as water. Along with alcohol the new make will consist of water and flavour compounds from the fermentation, which include flaours from the barley (for a fuller explanation of distilling, see: The Life of Malt Whisky Part 1).

Reflecting on the importance of barley to whisky making, it comes as no surprise that Bruichladdich – those self-proclaimed progressive Hebridean distillers – push the boundaries of the whisky world by creating a whisky that is made from barley that has been grown on the isle of Islay in Scotland. They aptly call this creation Bruichladdich Islay Barley. The barley used for this whisky was grown for Bruichladdich by Mark and Rohaise French, in the Minister’s field at Rockside Farm.

Emblazoned on the whisky’s bottle are the words “we believe terroir matters”. The world terroir comes from French, and is commonly used to describe the land and soil of a wine producing region. It is believed that the soil in which grapes grow can influence the flavour of wine which is made from those grapes, after the juice of those grapes is fermented. Cognac makers, who distil wine into brandy, have known the importance of terroir for centuries. The most coveted Cognac is from the Grande Champagne region of Cognac, because that region has chalky soil and this soil is believed to produce grapes that are perfect for making Cognac that has finesse. Bruichladdich, standing on the shoulders of wine and brandy making giants in France, have decided to employ this theory of terroir to whisky making. This means that  the barley grown in Islay is likely, once it is used to make a wash that is distilled, to give whisky a different flavour to barley that is grown in the mainland of Scotland (or elsewhere for that matter).

Malt Mileage has been very fortunate to be able to taste Bruichladdich “new make”, with tasting notes available in The Life of Malt Whisky Part 1. This includes Bruichladdich “new make” made from Islay barley, bere barley and organic barley. The Islay barley was quite earthy and full flavoured with oils and heavy congeners weighing down the ethanol. It had earthy, herbal and peppery flavours with a foundation of vanilla, caramel, honey, chocolate, saltiness and nuttiness.

Bruichladdich put this “new make” into oak barrels which over time give the “new make” a golden straw colour, infuse it with oak flavours and alter some of the compounds in it (for a fuller discussion of the way oak matures whisky, see: The Life of Malt Whisky Part 2.1). Bruichladdich Islay barley is unpeated, presumably to ensure that the flavour of the barley is not lost to the peat, and bottled at a generous 50% alcohol by volume.

Often in Cognac circles the way a brandy looks is part of its aesthetic pleasure – its colour, the way it catches the light and clings to the glass. The colour of Bruichladdich Islay Barley is a light golden wheat colour, but the way it hugs the glass – leaving thin legs that slope down as the oily film fades – is particularly impressive.

The bouquet is immediately quite sweet and sumptuous, with nutty Argan oil, banana, raisin, porridge, honey, whipped cream, pineapple, banana and raisin bread with crushed nuts and soft vanillas. A mild earthiness sits beneath that lovely aroma, with soft hints of pepper, mixed olives, anchovies and the backbone of the “new make” untouched by the oak- chocolate, oily nuts, nut oils and shades of golden and dark honey.

On the palate find vanillas and a soft creaminess, through which shines pepper, spice, mild anchovy and earthiness. There is something salty and earthy about this whisky, like a lick of rock salt and a sip of a platinum tequila.

The finish offers lingering flavours of honey, chocolate, nuts and a mild salt/saline. That saline is interlaced with rock and minerality, like tasting a sodium rich natural sparkling water.

Buy it. Bruichladdich Islay Barley is a fascinating malt that offers a very earthy, mineral and salty character, which can only be explained by the Islay barley. This malt showcases the Islay barley without letting the wood get in the way, and it is a delicious incarnation of Islay’s saltiness, earthiness and minerality in a bottle. The French have known for centuries that the soil which feeds grapes gives brandy made from those grapes important flavours and character. Glad to see the Scots have finally caught on, with a conscious attempt at bottling a piece of Scotland… literally.