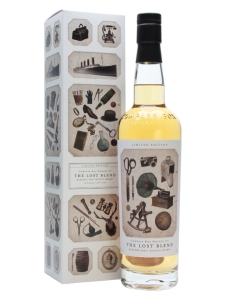 Limited to 12,018 bottles, Compass Box The Lost Blend is a Scotch malt blend comprised of whisky from two Highland distilleries (Clynelish and Allt-A-Bhainne) and one Islay distillery (Coal Ila). It is marketed as a revived version of the Compass Box Eleuthera, which was a blend the company ceased to produce in 2004 because the whiskies that made up the blend were no longer available. Times have changed, and it seems that Compass Box got its hands on malt whiskies that can reproduce some of the flavours of the Eleuthera. The whisky, being a recreation of what was once lost, is appropriately named after O. Henry’s “The Lost Blend” , which was published in 1907.

There is so much happening in this bouquet, it makes me stroke my strangely (for an Italian) Scottish looking red beard and ponder at the masterful blending that has gone into creating this Scotch whisky. The aromas are creamy and textured, with notes of vanilla ice cream, rum and raisin, melting tartufo and cherry ripe. Green Sicilian olives in lemon then emerges with ruby grapefruit, fresh orange segments (as they would be devoured at the half time of  football game), lemon and lime leaf, allspice, white pepper, bakery spices, fresh mint, spearmint, fresh parsley, caramels and, lush grassy notes. The peat is infused with soft creamy vanilla and sugars, which seems to create a fresh mint note with faint hints of honey and lemon cough drops.

On the palate the whisky offers a lovely mouth-feel, and as it sits on the tongue the taste of a dark herbal organic honey is most prominent, and as it slowly fades a host of other notes come out from the sticky layer of that delicious honey – mint and mixed fresh herbs, citrus, vanillas, green pear, cinnamon, dusty nutmeg and sour apple flavoured hard candy. This is not peat as it is commonly known.

The spices tingle with the soft glow of honey, as a soft hue of creamy vanilla, raisin, and sliced Granny Smith apples offer a drying finale, which is both sweet and sour.

Buy it, if it is within your budget. The Lost Blend is a whisky that is a must try for any whisky aficionado well versed in Scotch whisky from Islay and the Highlands. Despite the Coal Ila in this blend, there did not appear to be any kick of famous Islay peat or coastal flair common among island whiskies. Instead, the peaty Coal Ila whisky merged with the Highland whiskies from Allt-A-Bhainne and Clynelish to create a unique flavour profile that is neither emblematic of a peaty Islay whisky or an unpeated Highlander. This whisky, with its lovely dark honey and herbal notes especially, is a distinctive and very interesting dram. It is highly recommended.