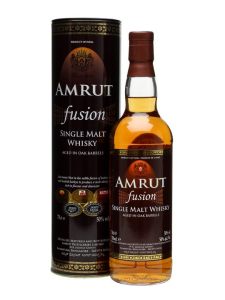 Amrut is perhaps the most famous Indian whisky distillery, at least outside India. It has won numerous awards and world leading whisky writer Jim Murray has praised the distillery, naming Amrut Fusion as the 3rd best whisky in the world in his Whisky Bible 2010.

Amrut Fusion is a whisky made from barley grown in India and Scotland. It is therefore aptly named, being produced from a fusion of Scottish and Indian barley. The character of this whisky is peaty (but not as potent or medicinal as Islay whiskies) and instead seems to remind me a lot of Teacher’s, Nikka All Black and other smooth and sweet whiskies with some peat. Hungarian salami seems to be a dominant flavour among the peat, with some pepper, fruit, dark chocolate and candied citrus notes that proceed to the finish with the lingering salami and peat notes.

I would not say this is the 3rd finest whisky I have tasted, but it is very very good! A delicious world class dram, all the way from exotic India! I never imagined that would happen in 2014, but it has!