Overall, this second visit to TGI Fridays Melbourne Central was excellent. The service was professional, fast, friendly and basically flawless. Sebastian, who was in charge of our table, was very friendly and he made sure we got all our drinks, condiments and food quickly. The food was also very good, with great presentation and the most delicious crispy seasoned chips I have had in a very long time. The only negative of the night was that Greta’s cut of meat had a thick layer of fat through the middle, but in any event she barely ate a third of it. Meanwhile, I ravaged my rare Angus rump in glee.

TGI Fridays is a restaurant that offers American, Texan and Mexican style food. In keeping with that theme, the restaurant has a fantastic selection of bourbons and tequila alongside the usual suspects from Scotland. The TGI Fridays happy hour, from 4pm-7pm, is also great value and includes measures of Johnnie Walker Blue Label for $10. We did not have any Blue Label, but we enjoyed a large selection of cocktails and spirits. 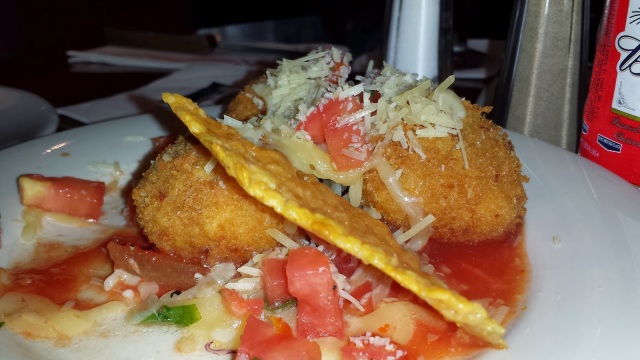 We started the evening with Crispy Chicken Parmesan Meatballs. This Mexican inspired dish was a nice start to the meal because it was not too heavy and it offered a nice balance between the salty cheese, savoury meatballs and sweet tomato.

I ordered a rare 340gram Angus Rump. It was cooked very well, soft to the touch and nice and dark pink in the middle while being crispy and charred on the outside. The chips were delicious – crispy, fresh and well seasoned. The mushroom sauce was OK, but I think it could have benefited from having some more mushroom in the actual sauce. Overall, the steak was delicious, the chips were delicious but the mushroom sauce was a letdown. We asked for a selection of mustards, and we were quickly given a jar each of English mustard, French mustard and seeded mustard. The mains also came out quickly, 20 minutes after the starter. 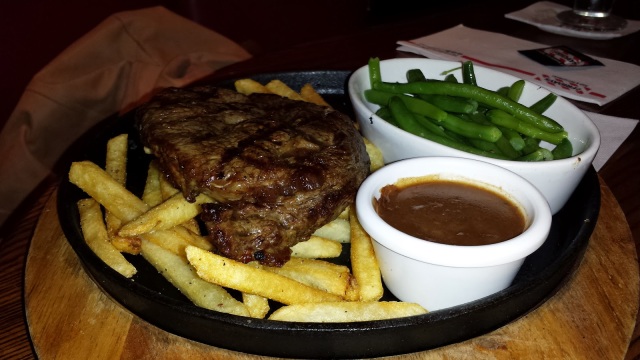 Greta ordered the 300gram Rib Eye. It was also cooked nicely and the way she ordered it (medium-well). She tried her hardest, but she could only finish about a third of this. I think she was more interested in the cocktails, and she guzzled down three with no problems.

The bar at TGI Fridays made great cocktails. All the cocktails were on the money with generous measures of spirit, and the staff even asked what kind of whisk(e)y we wanted in the Whisky Sour. Greta and I chose Baker’s bourbon, and as the cocktail did not last long I could tell this was a good choice.

I am not completely innocent in all this, as I enjoyed a measure of the fierce Booker’s bourbon and Patron Anejo with lime. Nibble the lime and sip the tequila slowly – delicious. I was also impressed with the price of the cocktails and spirits at TGI Fridays.

In summary, we had a fantastic time at TGI Fridays Melbourne Central on this visit. The service was excellent. The food was very good, let down only by the cut of the rib eye and the mushroom sauce. My main, the rump, was delicious – the meat was cooked beautifully and the chips were crunchy. Not much else I really want, besides a nice bourbon and tequila (which I got!). The cocktails are very well made and the spirits are generally good value.

In the words of Arnie, I WILL BE BACK. That said, no dessert for us. Too full.