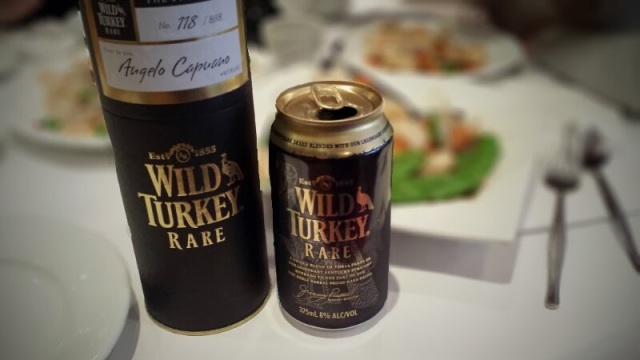 For an entire working week we Melbournians sweltered in temperatures exceeding 40 degrees Celsius. Not one drop of alcohol was consumed that week in my household, and then came the cool change on Friday evening after the temperature reportedly soared to an incredible 47.5 degrees Celsius.  The wind was suddenly refreshing, and my taste buds cried out for something delicious. The next day, on the Saturday, I washed down the consistently mouth-watering Chinese food at Harbour Inn in Altona with a can of Wild Turkey Rare & Cola and then savoured a generous dram of Cutty Sark Tam O Shanter while watching The Secret Life of Walker Mitty. Now if that won’t keep my taste buds happy I don’t know what will!  There is so much I want to say about the way the already ridiculously good Cutty Sark Tam O Shanter has changed (for the better!) after being open for a while, but this post is about the Wild Turkey Rare & Cola.
I am not a huge fan of RTD (“ready to drink”) alcohol, cocktails, mixers etc. I enjoy the taste of (most) alcohol and I want to taste that alcohol untainted by the mixer. I have had some fairly decent experiences (Canadian Club Dry, Jameson & Raw Cola/Cloudy Apple) and some absolutely dreadful ones (Jim Beam Devil’s Cut & Cola @ 6.66%… great call on the ABV though), but I have never finished a can or bottle of an RTD. I’ve never really enjoyed them very much, but then again, I haven’t tasted very much of them. Well, not only did I finish a nice cold can of Wild Turkey Rare & Cola but I was salivating for more. Let me explain.
Wild Turkey add to cola a mix of three parts of their Kentucky Straight bourbon and one part of their barrel proof Rare Breed, bottle it (or can it, as the case may be) at 8% alcohol volume and market it to the world to drink. The smoothness and balance of the drink is what I enjoyed the most – neither the cola nor the bourbon dominated but both ingredients worked together nicely. The cola actually seemed to unlock some of bourbon’s character which in turn moderated the sweet sugary cola – orange peel and tobacco accompanied some amplified rye notes which added a spicy and peppery touch with the toasty oak. The tasting notes aside, this is one of the few RTD’s I would buy again. Quality stuff!