Skip to content
Today I turn 30! Over the last week I have made an effort to taste and review old and rare whiskies in a series I call “The Week I Turn 30”, but today is the icing on the cake and the most exciting review of an old and rare legend: a 1980’s Jack Daniel’s Old No 7 Tennessee Whiskey.
What makes this so special is that I have unknowingly grown up with this bottle. It sat quietly in a tin box for almost three decades, neglected and ignored by my beer loving (and spirit hating) Dad; lucky me! I was very excited while rummaging through long ignored cupboards in the family home to find this bottle of Jack Daniel’s Old No 7, which, after some online research, I have traced back to the 1980’s. I was relieved to discover that bottles from the 1980’s only sell for about $120, which made my decision to open and taste this whisky much easier.
A time capsule in a bottle, this Jack Daniel’s represents the smell and taste of American history: what Jack Daniel’s tasted like in the 1980’s when I was either an idea, born or a few years old. I always wondered why my parents and grandparents would receive bottles of whisk(e)y as gifts and never open them. It doesn’t much matter now, as I am going back in time to the era of fuel inefficient cars, political incorrectness and really bad fashion; the 80’s.
What is Jack Daniels Old No 7? 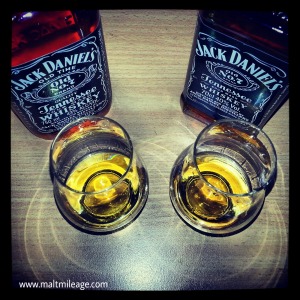 Jack Daniels is a Tennessee whiskey that is charcoal mellowed and produced in Lynchberg Tennessee. It needs no introduction, but curiously it has a distinct Italian-American connection. Angelo Lucchesi was the distillery’s first salesman, and, in a fine display of dedication, Frank Sinatra was buried with a bottle of Old No 7 in 1998.
No one really knows why Jack Daniel’s gave the Old No 7 its name, or why he chose the number 7. What is known is that the distillery continues to adhere to the same production methods that Jack Daniel himself used since winning a gold medal for his whiskey in St Louis in 1904. This whiskey has survived two world wars, the Great Depression and prohibition, and, frankly (no pun intended), it was a personal favourite of mine until overdoing it a little in college! I did not touch any whisk(e)y for many years after that night, but its legendary status pulled me back and the love affair was rekindled.
What are the differences between the 1980’s and the 2013 bottling?
This review will parallel taste and compare this 1980’s Jack Daniel’s Old No 7 with a Jack Daniel’s Old No 7 purchased in 2013. The main differences are:
No wonder Ole Blue Eyes (Frank Sinatra) was buried with a bottle of Old No 7 – it was seriously amazing whiskey!!!

Jack Daniel’s is the stuff of legend; exceptionally good all the time. Unlike some other world leading brands, I think every bottle represents the very best that American whiskey has to offer.