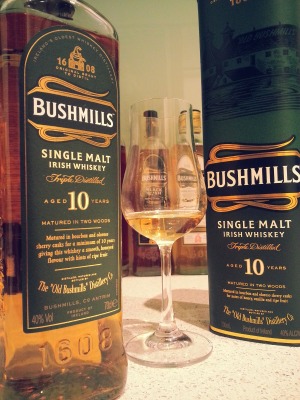 Bushmills is an Irish distillery that claims to be the oldest whisky distillery in the world because it gained its licence in 1608. For more about Bushmills and Irish whiskey, please see my review of Bushmills Black Bush.

There is something spectacular going on at Bushmills, because their whisky is among the most well balanced I have tasted. There is almost perfect harmony of flavours as the silky smooth whisky releases a complex character which involves the tastes of sweet, bitter, sour, salty and savoury dancing on the palate in almost perfect synchronization. This whiskey is in my “top whisky” list.
I was thinking of something Irish to write about, so naturally my imagination developed an image of a line of Irish people kicking away a riverdance! Wanting to avoid comparing an Irish whiskey to a riverdance, I am going to liken this whiskey to Roy Keane. Yes, Roy Keane. The sensational Irish footballer whose silky smooth skills and magic in midfield helped Manchester United to many victories. This whiskey is magical, silky smooth and exceptional. Superb!
Tasting Notes – Bushmills 10 Year Old
Nose

Beautiful and malty, this whisky has the sweet fizz of an apple and pear cider ordered from the mahogany bar at an old Irish pub. It has notes of bitter oak that balance against sweet fruit, such as apple, lemon and orange. Floral notes develop, as the sweet perfume of flowers mingles with grass and fresh rainfall. So complex, yet so smooth and vibrant!
Taste
An initial dry burst of chardonnay floods in carrying spice and pepper with the tang of green mango and lime, and that apple cider develops into a bitter-sweet pear cider with fizz and life. Bitter wood also merge with that sweet pear and apple as savoury saltiness such as soy sauce spill on the palate with herbaceous notes. Brilliant balance!
Finish
Boasting a fabulous finish, this whiskey glows on the tongue softly and recedes gracefully.