The United States produces many fine things, but I think one of the finest American exports is whiskey. The most popular American whiskies are Tennessee whiskey and Kentucky bourbon.

This page will: (1) explain how bourbon and Tennessee whiskey are different from each other and whisky in general; and (2) provide a list of American whiskies that I have reviewed (or that are ‘to be reviewed’ – “tbr”).

1. What is American whiskey, bourbon and Tennessee whiskey? 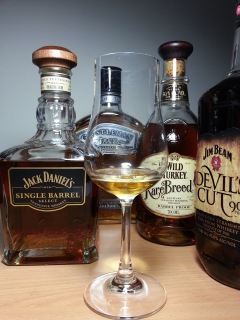 Jack Daniel’s is a Tennessee whiskey, while Wild Turkey and Jim Beam are Kentucky bourbons. Obviously bourbon can be produced elsewhere in the United States, but it cannot be called “Kentucky” bourbon or “Tennessee” whiskey.

American whiskey, like Irish whiskey, has an “e” in its spelling whereas Scotch is written as “whisky”. Tennessee whiskey and bourbon tend to be a little sweeter than Scotch whisky, and this different taste is understandable because they have a different production method prescribed by an international agreement and by law.
All bourbon is whiskey but not all whisky is bourbon or Tennessee whiskey. Whisky can be made anywhere in the world from grain which is fermented and dried, mixed with water to which yeast is added. This is then heated and the evaporated liquid is collected then aged in barrels. United States law provides for certain requirements to be met before an alcoholic beverage can be called a bourbon, so you can count on a difference!  Some of these requirements are:

From this, you can see how American whisky can develop quite a distinct taste. I hope to sample some more American whiskies in the future.